Analysts expect Pilgrim's Pride Co. (NASDAQ:PPC) to post $0.33 earnings per share (EPS) for the current fiscal quarter, according to Zacks Investment Research. Zero analysts have provided estimates for Pilgrim's Pride’s earnings. Pilgrim's Pride posted earnings of $0.45 per share in the same quarter last year, which would suggest a negative year-over-year growth rate of 26.7%. The firm is expected to announce its next earnings results after the market closes on Wednesday, October 28th.

On average, analysts expect that Pilgrim's Pride will report full year earnings of $0.73 per share for the current fiscal year, with EPS estimates ranging from $0.63 to $0.82. For the next fiscal year, analysts forecast that the firm will report earnings of $1.80 per share, with EPS estimates ranging from $1.30 to $2.30. Zacks Investment Research’s EPS averages are an average based on a survey of research analysts that that provide coverage for Pilgrim's Pride.

Pilgrim's Pride (NASDAQ:PPC) last posted its quarterly earnings results on Wednesday, July 29th. The company reported ($0.02) EPS for the quarter, missing the consensus estimate of $0.11 by ($0.13). The business had revenue of $2.82 billion during the quarter, compared to analyst estimates of $2.93 billion. Pilgrim's Pride had a net margin of 2.24% and a return on equity of 7.89%. The firm’s quarterly revenue was down .7% compared to the same quarter last year. During the same period in the prior year, the business earned $0.69 earnings per share.

Featured Article: What Are Cryptocurrencies? 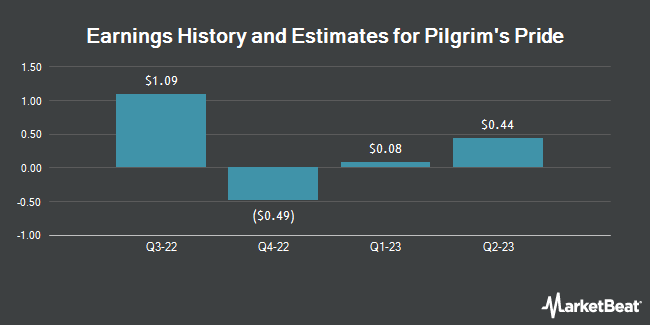