Complete the form below to receive the latest headlines and analysts' recommendations for Citrix Systems with our free daily email newsletter:

Citrix Systems (NASDAQ:CTXS) updated its fourth quarter earnings guidance on Thursday. The company provided earnings per share (EPS) guidance of $1.25-1.35 for the period, compared to the Thomson Reuters consensus estimate of $1.32. The company issued revenue guidance of $775-785 million, compared to the consensus revenue estimate of $786.95 million.Citrix Systems also updated its FY 2020
Pre-Market guidance to 5.89-5.99 EPS.

Citrix Systems (NASDAQ:CTXS) last issued its quarterly earnings results on Thursday, October 22nd. The cloud computing company reported $1.38 earnings per share (EPS) for the quarter, topping the Thomson Reuters’ consensus estimate of $1.25 by $0.13. The business had revenue of $767.17 million for the quarter, compared to the consensus estimate of $759.02 million. Citrix Systems had a net margin of 24.11% and a return on equity of 201.80%. The firm’s quarterly revenue was up 4.7% on a year-over-year basis. During the same quarter in the prior year, the company earned $1.52 EPS. On average, analysts expect that Citrix Systems will post 3.82 EPS for the current fiscal year.

Citrix Systems, Inc provides workspace, networking, and analytics solutions worldwide. The company offers workspace services, including Citrix Virtual Apps and Desktops, a cloud-enabled app and desktop virtualization solution that gives customers the flexibility to deliver desktops and applications as a service from cloud and on-premises datacenters; and Citrix Virtual Apps that allows Windows and Linux applications to be remotely delivered to Macs, PCs, thin clients, and Android/iOS mobile devices from any cloud, on-premises datacenter, or both. 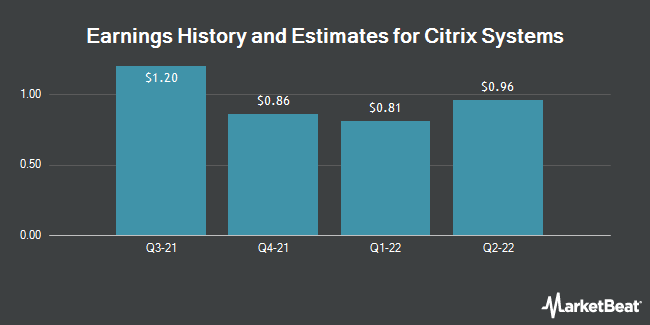