Complete the form below to receive the latest headlines and analysts' recommendations for Hecla Mining with our free daily email newsletter:

Clean Yield Group lowered its position in shares of Hecla Mining (NYSE:HL) by 8.6% in the 3rd quarter, according to its most recent disclosure with the Securities & Exchange Commission. The institutional investor owned 85,000 shares of the basic materials company’s stock after selling 8,000 shares during the quarter. Clean Yield Group’s holdings in Hecla Mining were worth $432,000 at the end of the most recent quarter.

Hecla Mining (NYSE:HL) last posted its earnings results on Thursday, August 6th. The basic materials company reported $0.01 EPS for the quarter, hitting the Thomson Reuters’ consensus estimate of $0.01. The business had revenue of $166.40 million during the quarter, compared to the consensus estimate of $160.42 million. Hecla Mining had a negative return on equity of 1.21% and a negative net margin of 8.51%. Hecla Mining’s revenue was up 24.0% on a year-over-year basis. During the same quarter last year, the company earned ($0.07) EPS. Sell-side analysts expect that Hecla Mining will post 0.12 earnings per share for the current year.

Hecla Mining Company, together with its subsidiaries, discovers, acquires, develops, and produces precious and base metal properties in the United States and internationally. The company offers lead, zinc, and bulk concentrates, as well as carbon materials to custom smelters, metal traders, and third-party processors; and unrefined gold and silver bullion bars to precious metals traders.

Want to see what other hedge funds are holding HL? Visit HoldingsChannel.com to get the latest 13F filings and insider trades for Hecla Mining (NYSE:HL). 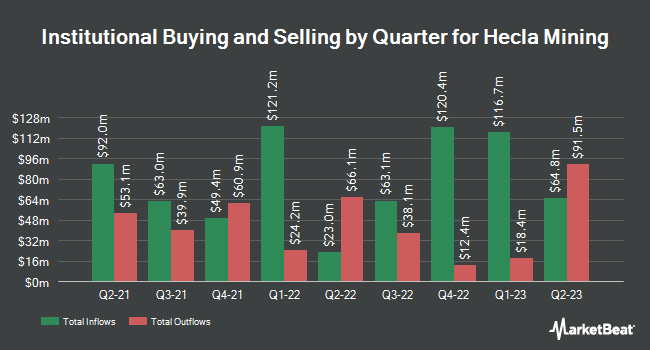