Complete the form below to receive the latest headlines and analysts' recommendations for Hudbay Minerals with our free daily email newsletter:

Equities research analysts predict that Hudbay Minerals Inc (NYSE:HBM) (TSE:HBM) will report sales of $254.07 million for the current quarter, Zacks reports. Fourteen analysts have provided estimates for Hudbay Minerals’ earnings, with the highest sales estimate coming in at $298.38 million and the lowest estimate coming in at $214.51 million. Hudbay Minerals reported sales of $291.28 million during the same quarter last year, which indicates a negative year-over-year growth rate of 12.8%. The firm is expected to announce its next quarterly earnings report on Monday, November 9th.

On average, analysts expect that Hudbay Minerals will report full year sales of $984.79 million for the current fiscal year, with estimates ranging from $903.15 million to $1.05 billion. For the next year, analysts expect that the company will report sales of $1.27 billion, with estimates ranging from $1.13 billion to $1.45 billion. Zacks’ sales calculations are an average based on a survey of research firms that follow Hudbay Minerals.

Hudbay Minerals (NYSE:HBM) (TSE:HBM) last released its quarterly earnings results on Tuesday, August 11th. The mining company reported ($0.15) earnings per share for the quarter, beating the Thomson Reuters’ consensus estimate of ($0.22) by $0.07. Hudbay Minerals had a negative return on equity of 7.04% and a negative net margin of 37.79%. The company had revenue of $208.91 million for the quarter, compared to analyst estimates of $188.95 million. During the same period in the previous year, the company posted ($0.21) earnings per share. The firm’s revenue was down 36.6% on a year-over-year basis.

Hudbay Minerals Inc, an integrated mining company, together with its subsidiaries, focuses on the discovery, production, and marketing of base and precious metals in North and South America. It produces copper concentrates containing copper, gold, and silver; and zinc metal. The company owns three polymetallic mines, four ore concentrators, and a zinc production facility in northern Manitoba and Saskatchewan, Canada, as well as in Cusco, Peru; and copper projects in Arizona and Nevada, the United States. 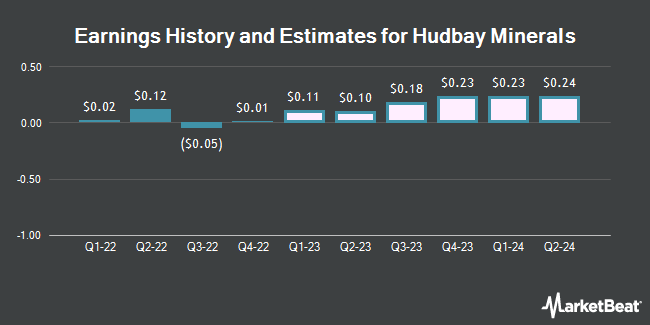