Complete the form below to receive the latest headlines and analysts' recommendations for Docusign with our free daily email newsletter:

Docusign Inc (NASDAQ:DOCU) Director Enrique T. Salem sold 15,000 shares of the company’s stock in a transaction on Tuesday, September 29th. The stock was sold at an average price of $214.35, for a total value of $3,215,250.00. Following the transaction, the director now directly owns 158,593 shares in the company, valued at approximately $33,994,409.55. The sale was disclosed in a filing with the Securities & Exchange Commission, which is available through the SEC website.

Docusign (NASDAQ:DOCU) last issued its earnings results on Thursday, September 3rd. The company reported $0.17 earnings per share for the quarter, topping the Zacks’ consensus estimate of ($0.21) by $0.38. The company had revenue of $342.21 million for the quarter, compared to analysts’ expectations of $318.55 million. Docusign had a negative net margin of 17.74% and a negative return on equity of 28.28%. The firm’s revenue was up 45.2% compared to the same quarter last year. During the same period in the prior year, the company earned $0.01 earnings per share. Analysts predict that Docusign Inc will post -0.85 earnings per share for the current fiscal year.

DocuSign, Inc provides cloud based software in the United States. The company offers e-signature solution that enables businesses to digitally prepare, execute, and act on agreements. The company sells its products through direct, partner-assisted, and Web-based sales. It serves enterprise businesses, commercial businesses, and small businesses, such as professionals, sole proprietorships and individuals. 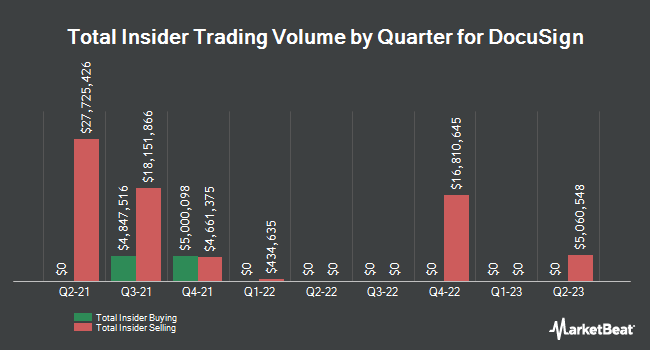 Receive News & Ratings for Docusign Daily - Enter your email address below to receive a concise daily summary of the latest news and analysts' ratings for Docusign and related companies with MarketBeat.com's FREE daily email newsletter.