Complete the form below to receive the latest headlines and analysts' recommendations for Hudson Pacific Properties with our free daily email newsletter:

According to Zacks, analysts expect that Hudson Pacific Properties will report full-year sales of $812.40 million for the current fiscal year, with estimates ranging from $787.20 million to $844.25 million. For the next year, analysts anticipate that the company will post sales of $827.06 million, with estimates ranging from $767.60 million to $873.17 million. Zacks’ sales averages are an average based on a survey of research analysts that that provide coverage for Hudson Pacific Properties.

Hudson Pacific Properties (NYSE:HPP) last announced its quarterly earnings results on Wednesday, July 29th. The real estate investment trust reported $0.02 EPS for the quarter, missing analysts’ consensus estimates of $0.49 by ($0.47). Hudson Pacific Properties had a net margin of 10.46% and a return on equity of 2.37%. The company had revenue of $198.61 million during the quarter, compared to the consensus estimate of $199.20 million.

In other news, Director Barry Alan Porter purchased 5,000 shares of Hudson Pacific Properties stock in a transaction that occurred on Wednesday, August 19th. The stock was acquired at an average cost of $23.09 per share, for a total transaction of $115,450.00. Following the purchase, the director now directly owns 99,594 shares of the company’s stock, valued at approximately $2,299,625.46. The transaction was disclosed in a filing with the Securities & Exchange Commission, which is available at this hyperlink. Company insiders own 2.37% of the company’s stock.

The company also recently announced a quarterly dividend, which was paid on Monday, September 28th. Stockholders of record on Friday, September 18th were given a $0.25 dividend. This represents a $1.00 annualized dividend and a dividend yield of 4.49%. The ex-dividend date was Thursday, September 17th. Hudson Pacific Properties’s payout ratio is 49.26%.

Featured Article: What is a conference call? 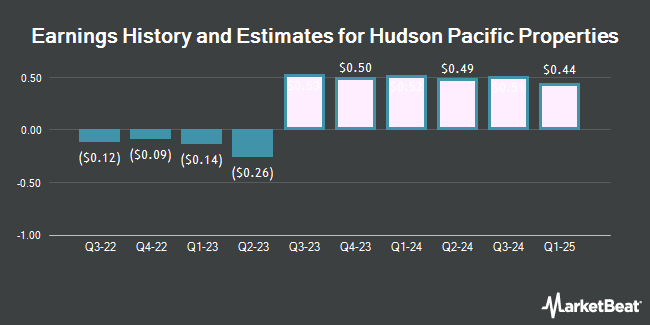