Complete the form below to receive the latest headlines and analysts' recommendations for Royal Dutch Shell with our free daily email newsletter:

Royal Dutch Shell (NYSE:RDS.A) announced its quarterly earnings data on Thursday. The energy company reported $0.16 earnings per share (EPS) for the quarter, topping the consensus estimate of ($0.23) by $0.39, MarketWatch Earnings reports. The firm had revenue of $32.50 billion during the quarter, compared to the consensus estimate of $53.70 billion. Royal Dutch Shell had a positive return on equity of 5.93% and a negative net margin of 4.22%. The business’s revenue for the quarter was down 64.1% on a year-over-year basis. During the same period in the prior year, the business earned $0.43 EPS.

Royal Dutch Shell plc operates as an energy and petrochemical company worldwide. The company operates through Integrated Gas, Upstream, and Downstream segments. It explores for, and extracts crude oil, natural gas, and natural gas liquids; markets and transports oil and gas; produces gas-to-liquids fuels and other products; and operates upstream and midstream infrastructure necessary to deliver gas to market.

See Also: The Structure of a Futures Contract 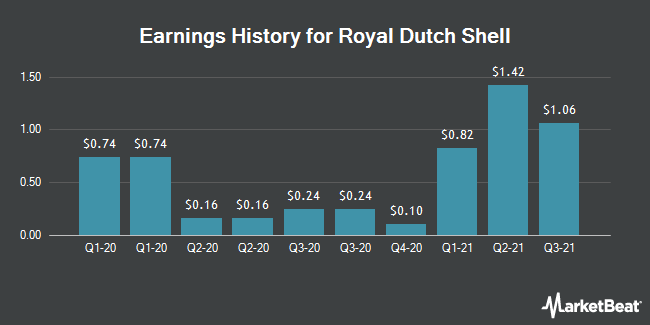