Complete the form below to receive the latest headlines and analysts' recommendations for KBR with our free daily email newsletter:

Shares of KBR, Inc. (NYSE:KBR) have received a consensus rating of “Buy” from the twelve ratings firms that are presently covering the stock, Marketbeat Ratings reports. One analyst has rated the stock with a sell rating, one has issued a hold rating and nine have assigned a buy rating to the company. The average 1 year target price among brokerages that have updated their coverage on the stock in the last year is $28.60.

KBR (NYSE:KBR) last released its quarterly earnings results on Wednesday, April 29th. The construction company reported $0.39 earnings per share for the quarter, beating the consensus estimate of $0.37 by $0.02. The firm had revenue of $1.54 billion for the quarter, compared to analysts’ expectations of $1.46 billion. KBR had a return on equity of 13.74% and a net margin of 0.99%. The company’s revenue was up 14.7% compared to the same quarter last year. During the same period in the prior year, the firm earned $0.36 EPS. Equities analysts forecast that KBR will post 1.63 earnings per share for the current fiscal year.

The firm also recently declared a quarterly dividend, which was paid on Wednesday, July 15th. Shareholders of record on Monday, June 15th were paid a $0.10 dividend. The ex-dividend date was Friday, June 12th. This represents a $0.40 dividend on an annualized basis and a yield of 1.80%. KBR’s payout ratio is presently 23.67%.

In other KBR news, EVP Ian John Mackey sold 24,636 shares of the stock in a transaction on Wednesday, June 3rd. The stock was sold at an average price of $25.82, for a total value of $636,101.52. Following the completion of the sale, the executive vice president now owns 91,237 shares in the company, valued at approximately $2,355,739.34. The sale was disclosed in a document filed with the Securities & Exchange Commission, which is available at this link. Corporate insiders own 0.97% of the company’s stock.

KBR, Inc provides professional services and technologies across the asset and program life-cycle within the government services and hydrocarbons industries worldwide. The company operates through three segments: Government Services, Technology & Consulting, and Engineering & Construction. The Government Services segment offers life-cycle support solutions to defense, space, aviation, and other programs and missions for government agencies in the United States, the United Kingdom, and Australia. 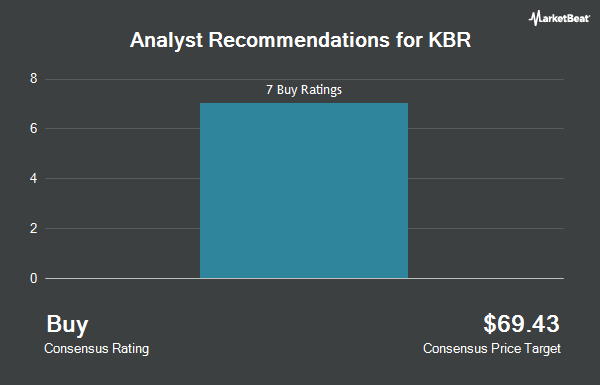 Receive News & Ratings for KBR Daily - Enter your email address below to receive a concise daily summary of the latest news and analysts' ratings for KBR and related companies with MarketBeat.com's FREE daily email newsletter.