Complete the form below to receive the latest headlines and analysts' recommendations for Generac with our free daily email newsletter:

Generac (NYSE:GNRC) had its target price hoisted by equities researchers at Roth Capital from $160.00 to $190.00 in a note issued to investors on Friday, The Fly reports. The firm currently has a “buy” rating on the technology company’s stock. Roth Capital’s target price suggests a potential upside of 20.57% from the company’s previous close.

A number of other equities research analysts have also recently issued reports on the company. Zacks Investment Research upgraded Generac from a “hold” rating to a “buy” rating and set a $137.00 price objective on the stock in a research note on Wednesday, July 1st. Stifel Nicolaus lifted their target price on Generac from $109.00 to $111.00 and gave the company a “hold” rating in a report on Friday, May 1st. UBS Group started coverage on Generac in a report on Thursday, June 25th. They set a “buy” rating and a $145.00 price objective for the company. Robert W. Baird boosted their price objective on Generac from $117.00 to $118.00 and gave the stock an “outperform” rating in a report on Friday, June 19th. Finally, JPMorgan Chase & Co. started coverage on Generac in a research note on Tuesday, July 21st. They issued an “overweight” rating and a $155.00 target price for the company. Four equities research analysts have rated the stock with a hold rating and nine have issued a buy rating to the company. The stock has a consensus rating of “Buy” and an average price target of $141.73.

Generac (NYSE:GNRC) last issued its quarterly earnings data on Thursday, July 30th. The technology company reported $1.40 earnings per share for the quarter, beating the consensus estimate of $0.92 by $0.48. Generac had a return on equity of 32.25% and a net margin of 11.55%. The business had revenue of $546.80 million for the quarter, compared to analysts’ expectations of $476.86 million. During the same period last year, the business earned $1.20 EPS. The business’s revenue was up .9% on a year-over-year basis. As a group, sell-side analysts expect that Generac will post 4.42 EPS for the current fiscal year. 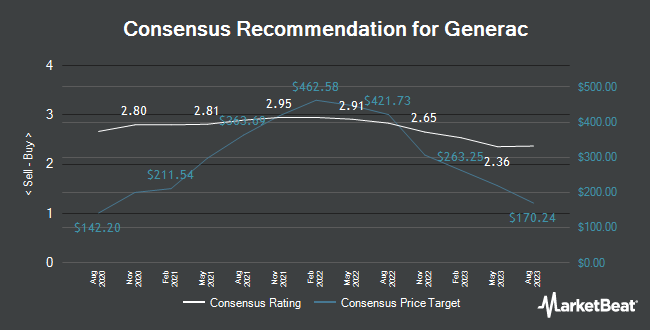 Receive News & Ratings for Generac Daily - Enter your email address below to receive a concise daily summary of the latest news and analysts' ratings for Generac and related companies with MarketBeat.com's FREE daily email newsletter.