Complete the form below to receive the latest headlines and analysts' recommendations for FormFactor with our free daily email newsletter:

FormFactor (NASDAQ:FORM) issued an update on its third quarter earnings guidance on Thursday morning. The company provided earnings per share (EPS) guidance of $0.30 to $0.38 for the period, compared to the Thomson Reuters consensus estimate of $0.28. The company issued revenue guidance of $170 million to $182 million, compared to the consensus revenue estimate of $158.77 million.FormFactor also updated its Q3 2020
After-Hours guidance to 0.30-0.38 EPS.

FormFactor (NASDAQ:FORM) last posted its earnings results on Thursday, July 30th. The semiconductor company reported $0.33 earnings per share for the quarter, topping the Thomson Reuters’ consensus estimate of $0.28 by $0.05. The company had revenue of $157.82 million for the quarter, compared to analyst estimates of $159.00 million. FormFactor had a net margin of 9.92% and a return on equity of 13.09%. As a group, research analysts expect that FormFactor will post 0.96 earnings per share for the current fiscal year. 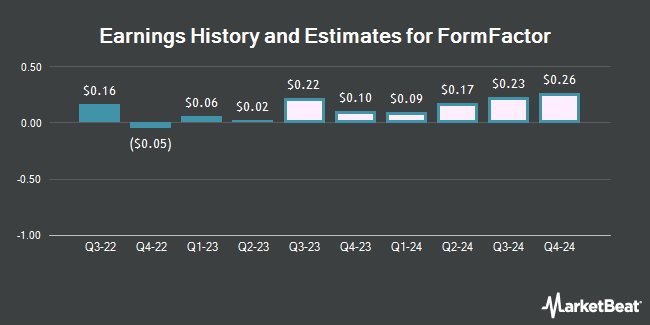