Complete the form below to receive the latest headlines and analysts' recommendations for Paramount Group with our free daily email newsletter:

Paramount Group (NYSE:PGRE) last posted its quarterly earnings data on Wednesday, April 29th. The financial services provider reported $0.01 earnings per share for the quarter, missing the Zacks’ consensus estimate of $0.25 by ($0.24). Paramount Group had a negative net margin of 4.54% and a negative return on equity of 0.77%. The company had revenue of $184.00 million for the quarter, compared to analysts’ expectations of $190.53 million. During the same period in the previous year, the firm earned $0.24 earnings per share. The firm’s quarterly revenue was down .2% on a year-over-year basis. As a group, equities analysts forecast that Paramount Group will post 0.96 earnings per share for the current fiscal year.

The firm also recently announced a quarterly dividend, which will be paid on Wednesday, July 15th. Investors of record on Tuesday, June 30th will be paid a dividend of $0.10 per share. This represents a $0.40 annualized dividend and a yield of 5.61%. The ex-dividend date of this dividend is Monday, June 29th. Paramount Group’s dividend payout ratio (DPR) is presently 40.82%.

Read More: Technical Indicators – What is a Golden Cross? 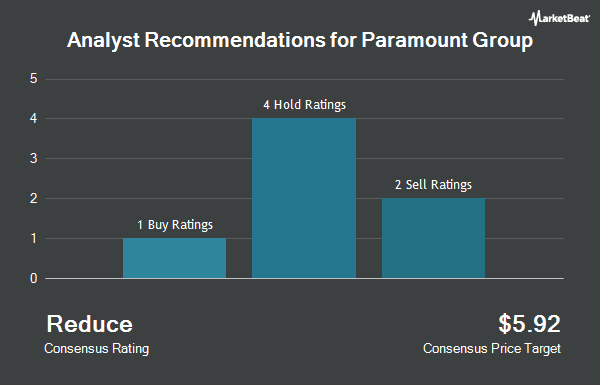