Complete the form below to receive the latest headlines and analysts' recommendations for Ambarella with our free daily email newsletter:

Ambarella Inc (NASDAQ:AMBA) VP Christopher Day sold 1,267 shares of the stock in a transaction on Tuesday, June 30th. The stock was sold at an average price of $45.92, for a total value of $58,180.64. Following the completion of the transaction, the vice president now directly owns 8,632 shares in the company, valued at $396,381.44. The sale was disclosed in a document filed with the SEC, which is available at the SEC website.

Ambarella (NASDAQ:AMBA) last announced its earnings results on Tuesday, June 2nd. The semiconductor company reported $0.04 earnings per share (EPS) for the quarter, topping the Zacks’ consensus estimate of ($0.01) by $0.05. Ambarella had a negative return on equity of 9.00% and a negative net margin of 18.18%. The business had revenue of $54.60 million for the quarter, compared to analyst estimates of $54.32 million. During the same period in the previous year, the company earned $0.01 earnings per share. The company’s revenue for the quarter was up 15.7% compared to the same quarter last year. As a group, research analysts predict that Ambarella Inc will post -1.52 EPS for the current year.

See Also: What kind of dividend yield to CEF’s pay? 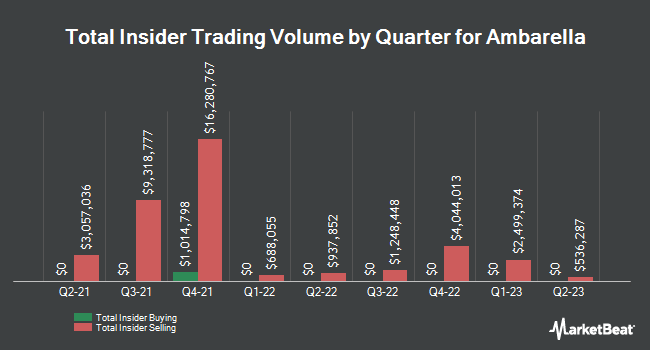