Complete the form below to receive the latest headlines and analysts' recommendations for Perficient with our free daily email newsletter:

$0.48 Earnings Per Share Expected for Perficient, Inc. (NASDAQ:PRFT) This Quarter

Brokerages expect that Perficient, Inc. (NASDAQ:PRFT) will post $0.48 earnings per share for the current quarter, according to Zacks Investment Research. Three analysts have provided estimates for Perficient’s earnings, with the lowest EPS estimate coming in at $0.47 and the highest estimate coming in at $0.49. Perficient reported earnings of $0.52 per share during the same quarter last year, which would indicate a negative year over year growth rate of 7.7%. The firm is scheduled to report its next earnings results on Thursday, August 6th.

According to Zacks, analysts expect that Perficient will report full-year earnings of $2.01 per share for the current financial year, with EPS estimates ranging from $1.94 to $2.05. For the next fiscal year, analysts forecast that the business will post earnings of $2.34 per share, with EPS estimates ranging from $2.30 to $2.38. Zacks Investment Research’s EPS averages are a mean average based on a survey of analysts that cover Perficient.

Perficient (NASDAQ:PRFT) last announced its earnings results on Thursday, May 7th. The digital transformation consultancy reported $0.51 earnings per share (EPS) for the quarter, beating analysts’ consensus estimates of $0.50 by $0.01. The company had revenue of $145.56 million for the quarter, compared to analyst estimates of $144.53 million. Perficient had a return on equity of 14.72% and a net margin of 6.77%. The firm’s quarterly revenue was up 8.8% compared to the same quarter last year. During the same quarter in the previous year, the company earned $0.43 earnings per share. 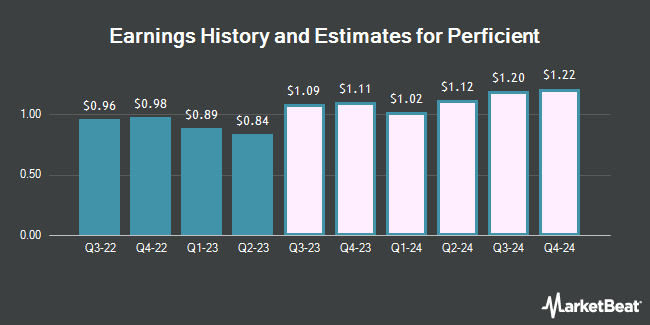