Complete the form below to receive the latest headlines and analysts' recommendations for Otter Tail with our free daily email newsletter:

Zacks Investment Research lowered shares of Otter Tail (NASDAQ:OTTR) from a hold rating to a sell rating in a report released on Friday morning, Zacks.com reports.

According to Zacks, “OTTER TAIL’s primary business is the production, transmission, distribution and sale of electric energy. The Company, through its subsidiaries, is also engaged in other businesses which are referred to as Health Services Operations and Diversified Operations. “

Otter Tail (NASDAQ:OTTR) last posted its earnings results on Tuesday, May 5th. The utilities provider reported $0.60 earnings per share for the quarter, missing the Thomson Reuters’ consensus estimate of $0.67 by ($0.07). The firm had revenue of $234.75 million during the quarter, compared to analyst estimates of $250.70 million. Otter Tail had a return on equity of 11.00% and a net margin of 9.34%. As a group, sell-side analysts predict that Otter Tail will post 2.12 earnings per share for the current fiscal year.

The business also recently disclosed a quarterly dividend, which will be paid on Wednesday, June 10th. Investors of record on Friday, May 15th will be issued a dividend of $0.37 per share. The ex-dividend date is Thursday, May 14th. This represents a $1.48 dividend on an annualized basis and a dividend yield of 3.52%. Otter Tail’s payout ratio is 68.20%.

Otter Tail Corporation, together with its subsidiaries, engages in electric, manufacturing, and plastics businesses in the United States. The company's Electric segment produces, transmits, distributes, and sells electric energy in Minnesota, North Dakota, and South Dakota; and operates as a participant in the Midcontinent Independent System Operator, Inc markets. 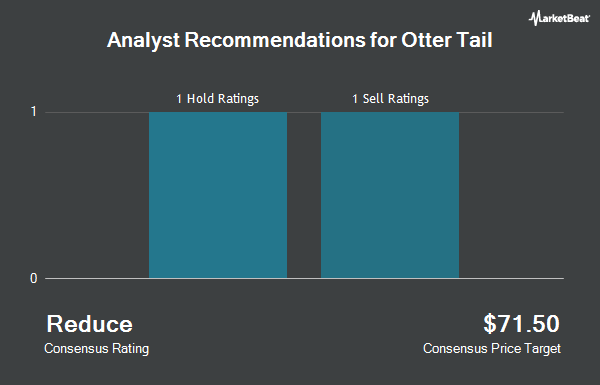