Complete the form below to receive the latest headlines and analysts' recommendations for RMR Group with our free daily email newsletter:

RMR Group (NASDAQ:RMR) last announced its earnings results on Thursday, February 6th. The financial services provider reported $0.57 earnings per share for the quarter, missing the Zacks’ consensus estimate of $0.58 by ($0.01). RMR Group had a net margin of 5.37% and a return on equity of 6.68%. The business had revenue of $159.89 million for the quarter, compared to the consensus estimate of $160.57 million. Equities analysts predict that RMR Group Inc will post 2.22 earnings per share for the current fiscal year.

The business also recently declared a quarterly dividend, which was paid on Thursday, February 20th. Investors of record on Monday, January 27th were paid a $0.38 dividend. The ex-dividend date was Friday, January 24th. This represents a $1.52 annualized dividend and a dividend yield of 4.01%. RMR Group’s payout ratio is currently 31.47%.

The RMR Group Inc, through its subsidiary, The RMR Group LLC, provides business and property management services in the United States. It provides management services to its five publicly traded real estate investment trusts (REITs) and three real estate operating companies. As of September 30, 2018, the company had approximately 1,700 properties under management, which are primarily owned by its Managed Equity REITs.

Featured Article: Pattern Day Trader – What is the PDT Rule?

Want to see what other hedge funds are holding RMR? Visit HoldingsChannel.com to get the latest 13F filings and insider trades for RMR Group Inc (NASDAQ:RMR). 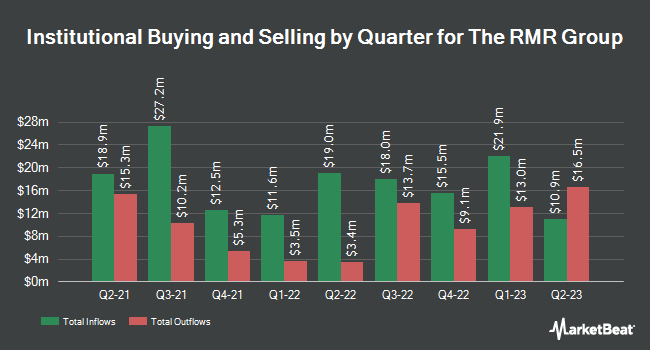