Complete the form below to receive the latest headlines and analysts' recommendations for Littelfuse with our free daily email newsletter:

$358.59 Million in Sales Expected for Littelfuse, Inc. (NASDAQ:LFUS) This Quarter

Wall Street analysts forecast that Littelfuse, Inc. (NASDAQ:LFUS) will report $358.59 million in sales for the current quarter, according to Zacks. Five analysts have issued estimates for Littelfuse’s earnings, with the lowest sales estimate coming in at $356.84 million and the highest estimate coming in at $360.02 million. Littelfuse reported sales of $405.50 million in the same quarter last year, which indicates a negative year-over-year growth rate of 11.6%. The business is scheduled to report its next quarterly earnings report on Wednesday, May 6th.

Littelfuse (NASDAQ:LFUS) last announced its earnings results on Wednesday, January 29th. The technology company reported $1.17 EPS for the quarter, topping the Zacks’ consensus estimate of $1.15 by $0.02. The firm had revenue of $338.50 million during the quarter, compared to analysts’ expectations of $340.40 million. Littelfuse had a return on equity of 11.32% and a net margin of 9.25%. The company’s quarterly revenue was down 15.9% on a year-over-year basis. During the same quarter in the previous year, the business earned $1.87 EPS.

The firm also recently disclosed a quarterly dividend, which will be paid on Thursday, March 5th. Investors of record on Thursday, February 20th will be issued a dividend of $0.48 per share. This represents a $1.92 dividend on an annualized basis and a yield of 1.03%. The ex-dividend date of this dividend is Wednesday, February 19th. Littelfuse’s payout ratio is currently 28.15%.

Featured Story: What are no-load funds? 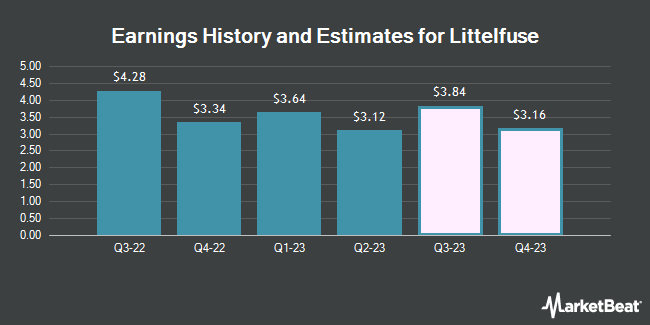