Complete the form below to receive the latest headlines and analysts' recommendations for First Financial Northwest with our free daily email newsletter:

According to Zacks, analysts expect that First Financial Northwest will report full year sales of $45.63 million for the current fiscal year, with estimates ranging from $45.25 million to $46.00 million. For the next financial year, analysts expect that the firm will report sales of $48.50 million, with estimates ranging from $48.20 million to $48.79 million. Zacks’ sales averages are a mean average based on a survey of research analysts that cover First Financial Northwest.

First Financial Northwest (NASDAQ:FFNW) last issued its quarterly earnings results on Thursday, January 23rd. The bank reported $0.26 earnings per share (EPS) for the quarter, topping analysts’ consensus estimates of $0.23 by $0.03. The company had revenue of $11.22 million for the quarter, compared to the consensus estimate of $10.80 million. First Financial Northwest had a return on equity of 6.75% and a net margin of 16.26%.

In other news, CEO Joseph W. Kiley III sold 3,000 shares of the firm’s stock in a transaction that occurred on Monday, December 16th. The stock was sold at an average price of $15.07, for a total value of $45,210.00. Following the transaction, the chief executive officer now owns 24,365 shares in the company, valued at $367,180.55. The transaction was disclosed in a document filed with the SEC, which is accessible through this hyperlink. Company insiders own 6.87% of the company’s stock.

Featured Story: How Investors Can Profit from Options Trading 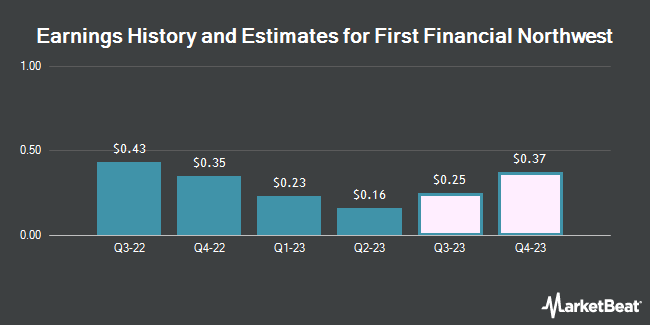 Quantstamp Trading Down 20.6% Over Last Week